Welcome to our very own guide to NMZ points! We will teach you what NMZ points are, the best practices on how to acquire them, the rewards you can get and much more!

A brief overview of the Nightmare Zone

If you have read our other guides regarding NMZ, feel free to skip this part!

The Nightmare Zone (NMZ) is a minigame located near the east border of Yanille. The minigame consists of you fighting bosses, you have previously defeated while doing quests, to earn XP and NMZ points. You need at least 5 completed quests in order to begin the minigame. Feel free to check our boss guide regarding which ones are the best to start with and which ones are the best in general. This activity has 3 modes and two difficulties for each. Practice, Endurance, and Rumble are the three modes with Easy and Hard difficulties. Since practice doesn't give NMZ points, we will only talk about endurance and rumble.


- Endurance mode has you fighting every boss you have unlocked via questing, in 1 on 1 combat. These bosses come in waves and the activity ends when either all bosses are dead or you – the player, die. For each boss defeated you will be awarded points.

- Rumble has two modes: regular and customizable. The regular rumble spawns multiple random bosses, that you have defeated in quests, and once you kill one of them, another one will spawn and take its place. The minigame only ends when you are defeated. Customizable rumble allows you, for a price, to select which bosses to fight. Then only the selected bosses will continuously respawn until you are defeated.


What are NMZ points?

To keep this brief, we will only talk about the Customizable Rumble on hard difficulty. The endurance and the regular rumble give very little points and are believed to just be a waste of resources. On the other hand, playing this game on Easy is considered a waste, as well. The main difference between hard and easy mode are the hitpoints the bosses have, no other stats are affected. Therefore, there is no point on playing in easy as you earn less XP and fewer points for the same resources.

NMZ points are your reward for defeating each boss in the minigame. Each boss gives a pre-set amount of points. The points rewarded per boss increases exponentially with the number of bosses selected in the rumble. NMZ points get accumulated throughout the fight by defeating each boss. The maximum points a hard rumble can accumulate is 1.048.575.

What is the best way to accumulate NMZ points?

This minigame can be extremely beneficial to all characters. Whether it's for farming points or XP, NMZ offers something for everyone. The best advice we can give you when trying to accumulate NMZ points is to automate the process as much as possible. However, when you are starting out you will be forced to use your own resources. After a while, you will be able to accumulate enough points to cover your expenses and much more.

Automating the process of the NMZ

The NMZ is an activity that is extremely desirable for three very important reasons. The first one is, it's ability to produce high XP rates when training. Secondly, the cost to do the activity is practically 0, apart from the starting resources and the cost of opportunity. Lastly, but most importantly, the AFK-ness of the minigame. With just a few clicks every 20 minutes, you can spend hours upon hours in NMZ producing incredible amounts of XP and points, while laying back and watching Netflix. That's why it's important to automate the process. This means to click the least amount of times. 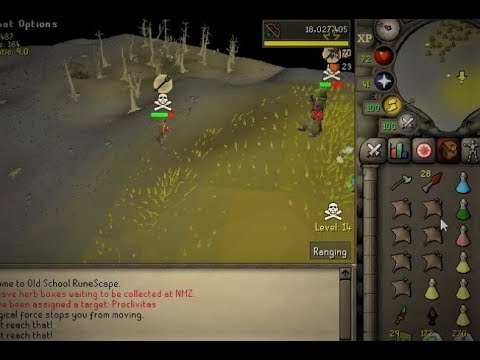 The best AFK methods for NMZ are:

- Using absorption potions and super combat potions while using your best gear. Super combat potions do not have the negative (in this situation) side effect of healing you 50 HP when they run out as the overloads do. Therefore you can efficiently AFK for 10-20 minutes before having to lower your health again.

- The other AFK method is with using 100% NMZ resources – overloads and absorptions. However, this method can only be done for 5 minutes at a time because the overload potions heal you for 50 HP after every minute.

- Another very expensive method is to use prayer potions and protection prayers. This method can only last up to 10 minutes because you will eventually run out of prayer potions and points. Another big drawback is the fact that you will only be able to select bosses with 1 attack style – melee.

- The second method is using full guthans set on easy rumble. Do not attempt this on hard, the bosses will shred even through a level 99 defense account. However, this method is much better done at bandit camps and crabs.

The rewards you can get from NMZ

The most important reward you can draw out from the NMZ is the ability to imbue your Fremennik rings. This activity will provide the rings with (i) symbol at the end and will double their stat points. On top of that, you can imbue your slayer mask and your slayer helmet to add the 15% bonus damage and accuracy to magic and ranged attacks, not only melee. Another important aspect of farming NMZ points can be the herb boxes which are daily. For 9500 NMZ points, you can purchase 15 herb boxes. This is a very interesting moneymaker each day, this activity can produce around 150.000 GP.

Farming NMZ points can be very beneficial to the growth of your character. From imbuing rings to getting incredible XP rates per hour, are all the benefits of learning how to afk properly while training. If you aren't sure on how to do this activity or you need help, then we can help you with that. Our team can reach incredible XP per hour rates on your account while accumulating insane amount of points for you to spend at your will. You can check out our services, right here on nmztraining.com.