What is the Nightmare Zone?

The Nightmare Zone or NMZ for short is a minigame located in Yanille. The premise of the minigame is that you have to fight the hardest challenges you have faced so far in OSRS. Therefore, having 5 completed quests with end bosses being a hard prerequisite to beginning the minigame. Fortunately, once you finish 5 quests which have end bosses, a teleport to the minigame is unlocked.

Why should you do the NMZ?

The reason people do the NMZ is because it holds one of the best XP per hour methods for leveling up combat stats. However, NMZ is not optimal before at least level 60-70 combat. You will not be able to survive long, it will cost many resources and you will not be able to do the best methods, thus making other methods such as sand and rock crabs much better for the lower levels. Apart from the XP reasons, NMZ holds the key to imbuing Fremennik rings and Black Mask/Slayer helm. By imbuing the rings, you double the stats on them. By imbuing the mask and the helm, you will add a 15% damage and accuracy boost for magic and range, previously having only 15% bonus in melee.

What are the modes I can play NMZ in?

NMZ comes in 4 different modes. The first one is Practice mode, this mode is just for that, practice. You will not earn any XP or NMZ points while doing it. The second mode is endurance. This phase has you unlocking bosses before it starts, and it ends once all the unlocked bosses have been slain. Thirdly we have the Rumble. The rumble places you against 5 random bosses that you have unlocked via questing. Lastly, we have the Customizable Rumble, which is an endless fight. Here you will handpick any number of bosses above 5 and you will have to fight them until you die. But don’t worry, this minigame is safe so all the items you bring with you are safe as well.

Difficulties in the modes and which one to choose.

There are two difficulties in which you can choose the game modes, Easy and Hard. The easy difficulty presents the bosses as you encountered them in the quest, with the same hit points and stats. The Hard difficulty presents the bosses with significantly more hitpoints, making them harder to kill. Of course, the hard difficulty awards much more points than the easy one. On top of that, having more hitpoints is preferred when looking to achieve high XP per hour. Our first tip of the day is to always choose the Hard Difficulty!

Keep in mind, that for every attempt at the minigame, you will have to pay a service fee. The mode that we will be looking into today is going to be the Customizable Rumble at hard and easy difficulty. For these, you will need to fork up 26k and 22k respectively to begin the game.

We will not get into the NMZ bosses in this Guide as we have written a whole separate section regarding them, right here on this article.

3 tips for NMZ – starting out!

Firstly, before starting out you need to look at what your goal is. For the first few runs, you shouldn’t focus on obtaining the highest XP per hour possible, but to gather as many NMZ points possible to unlock absorption potions and overloads. That’s why when starting out, you should get your best gear and fill up on prayer potions to keep protect from melee up. 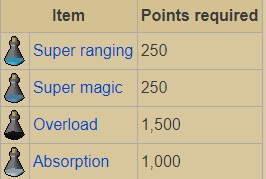 Secondly, for the first few attempts, do not go for the bosses that give extra XP. Those are usually higher level with high-level defensive stats. You will not hit much through them and you might end up dying before you finish the minigame, thus wasting resources. Refer to our NMZ bosses guide and pick the easiest 5.

Thirdly, Prayer flick. Flicking your prayers on and off will substantially increase the time you can spend inside the minigame. The whole point of these early runs that you do with your resources is to acquire as many points as possible in order to reach the highest XP per hour rates.

The one thing that we really need to say about power-ups is disregarding them completely apart from the Power Surge. When learning, you are much better off not using them, because using the incorrectly can cost your progress. 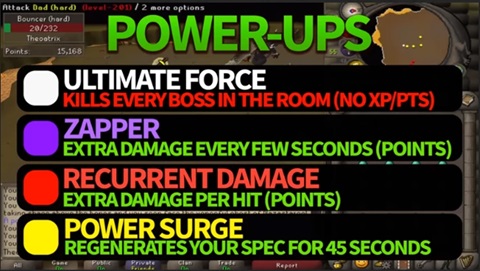 Guide to attaining highest XP per hour rates in NMZ

The method to the madness is the following:

The absorption potion gives you 50 points of absorption. If you have full hitpoints, the maximum the bosses can hit you as far up as their maximum hit ceiling. However, if you have only 1 HP, the maximum the bosses can hit you is 1 HP. So, the goal is to always keep yourself at 1 HP while maintaining the absorption. You can pre-pot this potion for up to 1000 points of absorption. In turn making you last an incredibly long amount of time, as they will have to hit you 1000 times before you start taking damage.

The trick is to use the Dwarven Rock Cake to keep yourself at 1 HP constantly. As soon as you regenerate up to 2 HP make sure to use the cake, otherwise you are wasting resources.


Step by step guide to the NMZ

- Step two: Pick all the available bosses for maximum points (check our boss guide for this)

- Step three: Go inside and drink an overload potion

- Step four: Rock cake yourself down to 1 HP

- Step five: Target the monsters that give the most amount of points

- Step six: Make sure to re-pot, re-use the cake and use absorptions when you fall down below 100 hits.

- Step seven: Enjoy the high XP per hour and points!

This has been a very brief guide regarding NMZ and getting started. We host a whole array of different more in-depth guides regarding the minigame, feel free to check them out on the website. Happy training!