There are many ways to level up your Thieving skill in Old School Runescape, even on Ironman mode. It’s the same as you would in normal mode, but don’t fret! This guide will help you find the fastest way to your liking to get to level 99 Thieving on an Ironman account.

These can be created at the Fancy Clothes Store in Varrock from 2 dark kebbit furs for 600 GP or bought from the Grand Exchange for 3,328 GP each. While equipped, the Gloves of Silence increase players’ pickpocketing success rate by 5%.

You can wear the gloves if you have a Hunter level of at least 45. The Gloves are damaged each time you pickpocket unsuccessfully and will be destroyed after 62 failed attempts.

However, the Gloves’ 5% success rate does NOT stack with the 10% success rate of the Ardougne’s cloak if you own one. It simply overrides the effect, so your success rate will remain at 10% if both are worn simultaneously.

You can get this untradeable set of armor in a rogue’s equipment crate, which you can obtain after successfully opening the safes at the end of the Rogue’s Den minigame. The minigame can only be accessed at level 50 thieving, however.

The set consists of the rogue mask, rogue top, rogue trousers, rogue gloves, and rogue boots. Once equipped, you get a chance to pickpocket loot from an NPC twice. If you have equipped the full suit, double loot from the NPCs you pickpocket is a guarantee.

This is an opal necklace enchanted via the level 1 Enchant spell, using a Cosmic Rune and a Water Rune. It gives you a 25% chance not to be stunned and damaged when you unsuccessfully pickpocketing an NPC. It holds ten charges, with one charge being consumed after successful prevention. The necklace crumbles to dust after the 10th use.

TIME TO LEVEL UP

Now that you have upgraded your thieving outfit, here are some of the fastest ways to level up your Thieving skill from level 1 to level 99 and above!

If you are impatient and want to get to level 99 Thieving ASAP, you can go questing and skip your early levels easily. Jumping from level 1 to level 24 can easily be done by completing the Biohazard, Fight Arena, Hazeel Cult, Tribal Totem, and Tower of Life quests, granting you 7,200 XP. You don’t have to worry as a low-level Ironman since these quests require only a few requirements. Be careful, though, as some of those quests involve a little bit of combat.

To ramp you up to 37 Thieving, you need to complete the Queen of Thieves, The Giant Dwarf, Death to the Dorgeshuun, Creature of Fenkenstrain, The Golem, and The Feud quests. These will grant you 22,700 XP.

If you want to go slow and steady, we all must start somewhere small. In your starting levels, pickpocketing men and women are the only viable option. It takes about 49 successful pickpockets to acquire Level 5 Thieving.

Based on OSRS Wiki, the fastest experience is gained by stealing cake from bakers’ stalls in the courtyard outside Kourend Castle or in the East Ardougne market. There is an easy trick in getting away with stealing cakes without getting caught. You only have to stand where the baker is, and the guards nor the baker won’t notice you. This is more effective in the market in East Ardougne, in the cake stall further east.

Recommended in the Ironscape Subreddit, you can also steal from silk stalls in the East Ardougne and Kourend market once you reach Level 20 Thieving. However, this offers less XP per hour than cake stalls. But for low-level Ironmen, this is one viable moneymaking option since the silk can be sold to the silk merchant for 60 GP each. 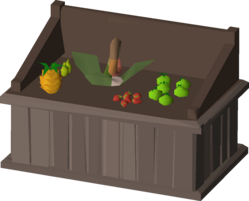 The fastest way to ramp up your XP is to steal from fruit stalls in Hosidius (this requires 15% favor from the city). You get 28.5 XP per fruit, and the best place to do this is in the easternmost house near the beach with two fruit stalls nearby. You can steal from both stalls or just one of them, gaining up to 42,750 XP per hour and 34,200 XP per hour, respectively. It is not recommended to bank the fruits as it lowers XP rates significantly.

These next few methods are from levels 45-99, all suggestions from the Ironscape Subreddit and the OSRS Wiki. Read up on them and figure out the best method for you!

To unlock blackjacking, you must have completed The Feud quest and have any kind of blackjack. Blackjacking bandits in Pollnivneach offers the fastest XP gain from level 45 and above. While there are three types of bandits you can blackjack (Bearded Pollnivnian Bandits, Pollnivnian Bandits, and Menaphite Thugs), the method is all the same: knock them out and pickpocket them twice while unconscious.

Be careful; you can get caught by the bandit trying to knock them out. They will become aggressive and hit you for 4HP when this happens.

To lessen the possibility of you getting stunned by the bandit while pickpocketing them, have a full inventory using inventory blocking food—like Saradomin brew, wines, stews, pies, etc. These also help you heal up when bandits give you damage.

From level 45 to 55, it is recommended to blackjack Bearded Pollnivnian Bandits. You can get around 60,000 to 90,000 XP per hour, depending on your Thieving level and performance.

Stealing artifacts in Port Piscarilius give the fast XP from level 45 to 65, but this method is recommended between blackjacking up to level 99.

You must have 75% favor in Port Piscarilius to do this. Completing the Queen of Thieves quest is also recommended for the fisher’s flute teleport to Kharedst’s memoirs, which offers a teleport to Port Piscarilius. This activity involves a lot of running, so you need to use stamina points to restore run energy often.

Talk to Captain Khaled to get involved with the heist, stealing artifacts from those in the residential district. Each successful heist yields more Thieving XP and 500 to 1,000 GP.

Pickpocketing may be slower, but it is the easiest way to level up in this level range if you don’t want to do too much work blackjacking and questing. You need to have completed the medium tasks in the Ardougne Diary to successfully pickpocket the Ardougne Knights, which increases your success rate to 10%.

Master farmers may be trickier. For a 100% success rate, start pickpocketing them at level 94 Thieving with the hard Ardougne Diary bonus. They commonly yield ranarr and snapdragon seeds, which can be sold for a high price.

If you have reached level 91 Thieving and want the fastest possible way to reach that 99 Thieving skill goal, the Pyramid Plunder minigames offers just that.

To get there, you will need access to Sophanem by starting the Icthlarin’s Little Helper quest. For this minigame, you need to stock up on high-healing food, some stamina potions, and some form of antipoison.

You can start the Pyramid Plunder at a lower level—like75 or 80—but it will be significantly slower and grant you lower XP per hour.

And that is all you need to know. Figure out what works for you and get to grinding!